EXCLUSIVE: Andy Griffiths shares how he went from singer in a punk band to one of Australia's most loved children's authors 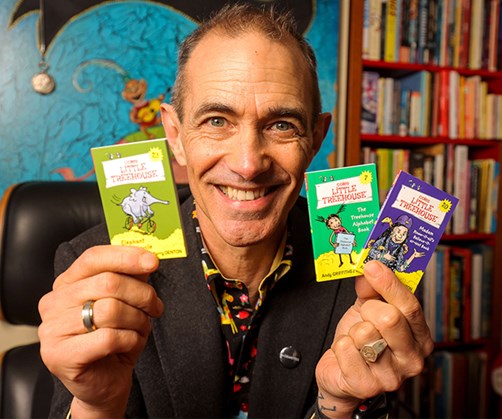 Andy Griffiths began his writing career by making teeny tiny little books while working as a teacher to help encourage his students find a love of reading and writing.

Now some 25 years later he's one of Australia's most adored and lauded children's authors and the little books are back!

Andy Griffiths and illustrator Terry Denton have partnered with Coles to create 24 Coles Little Treehouse books to collect, based on the much-loved characters from their most successful Australian kids’ book series of the past decade.

For Andy, getting kids to love reading is what it's all about.

He sat down with Practical Parenting to chat ...

The Treehouse books have been an incredible success, over 10 million copies sold and a slew of prestigious awards. Yourself and illustrator Terry Denton seem to be making magic together, what do you put the success down to?

There are so many things! But I think it’s a combination of hard work, hard play and extremely good luck.

We take a year to make each book and that involves an enormous amount of revising and rewriting. But we also have a lot of serious fun in the process. We play with words, pictures and ideas for the sheer pointless pleasure of it and I think the readers pick up on this.

Almost 30 years ago I had the good fortune to meet Terry and we connected instantly based on a shared sense of humour and a love of literary and illustrative chaos, which we’ve had more than 30 books to explore and refine. And then we met Jill (now my wife) who edited our first children’s book, Just Tricking!, and has worked with us on every book since. She is a crucial third member of the team, a combination of co-writer, umpire and first reader.

I think the Treehouse series in particular has found an enormous readership because the stories can be quite complicated and involved but are easy to read thanks to Terry’s copious and endlessly inventive illustrations. The books are an unusual combination of adventure, fantasy and humour: there’s something for almost everyone.

"We take a year to make each book and that involves an enormous amount of revising and rewriting. " Image: Supplied.

You’re a dad, what do your own daughters think about having a dad that so many children know about and whose stories they adore? Particularly now that more and more children are getting the opportunity to fall in love with the tales through the Coles-mini promotion?

Well, my daughters are 19 and 27 so they’re taking it in their stride these days, but then I think they always did. The absurdist humour of the books is very much present and valued in our home and, in addition, Jill and I were constantly workshopping the stories so the books were kind of unremarkable and normal to them. In general, they preferred real books—the sort written by other people!

How would you say fatherhood and your home life has impacted your story telling?

I think fatherhood helped to make me more disciplined as a writer and to make the most of whatever time was available. I learned to do the equivalent of a whole day’s writing in the two hours in the middle of the day that my first daughter napped (because that was about the only time she ever slept!).

When Sarah, my second daughter, was learning to read Jill and I were inspired to write a beginning reader for her The Cat on the Mat Is Flat. Two years later our book was finished—but she’d already learned to read!

Never mind … we understand the book has helped many other children to learn to read—and even more importantly—learn to enjoy reading. And it was a crucial early step in developing the Treehouse series, so it all worked out in the end!

My daughters generally didn’t come on the road with me, unless I was talking at a dedicated children’s festival—but they have really enjoyed the various theatrical productions of our books that have taken place over the years, especially the backstage buzz, attending rehearsals and hanging around with the actors.

You were self-published until the age of 35 when a publisher took on Just Tricking! (a fave in this house!) Was writing always the dream? Did you have any other gigs before this?

I was writing from the moment I was old enough to pick up a pen. It was usually always something to entertain my family and/or friends - I never thought of it as a career.

I spent my late teens and early to mid-twenties in various punk bands as a lyric writer–vocalist, but after a while I realised I was more interested in the words and I started applying myself to formal writing study and serious daily writing practice.

Around the same time, I became a high school English teacher and met a lot of students who had a negative relationship to reading and writing. I began writing silly funny stories for them and inviting them to use these stories as models for their own writing.

We actually used to make little books the size of the little treehouse books!

I self-published collections of the stories I was writing for my students and these led - over ten years - to my first officially published book, Just Tricking!

I was writing from the moment I was old enough to pick up a pen.

Kids have the opportunity to try their own hand at writing and illustrating as part of the picture storybook school competition with great prizes to be won, as well as thousands of book donations to schools in remote Indigenous communities through Coles’ partnership with the Indigenous Literacy Foundation.  Do you have any tips for kids who might be wondering how to get started?

I think some of the best and most startlingly original books come when the writer bases them on events and/or people in their real life. Tell a story about a time you were embarrassed, when you got into trouble, when you made a mistake, when you got really mad at somebody and what you said or did … or what you would have liked to have said or done.

Many of the most effective stories start with something true but they don’t have to stay true. You can write anything, take your reader on an amazing trip to an unimaginable place starting from a very ordinary one! So, what are you waiting for? Do it!

Here’s a starting line for you: ‘It was just another ordinary day until …’

5 essential questions to help you choose the right preschool…

Confused about ‘healthy’ snacks for kids?

How to keep your kids safe around electricity